A few weeks ago I happened upon a negative review of another seller on Facebook involving a Sansevieria that Express shipping was encouraged for. The seller charged for Express, but shipped Priority mail and the Snake plant arrived something around a week after shipping. I chimed in with “I don’t think you even need a box to ship a Snake plant, let alone Express shipping – they’re so tough!” and that spawned a thought cascade – What would happen if you shipped a plant without a box?

So I found a modestly sized Whale Fin Sansevieria (something wide and flat enough to house a label, she was about 18″ total length) and touched base with another plant aficionado in Michigan, Sarah Doyle. 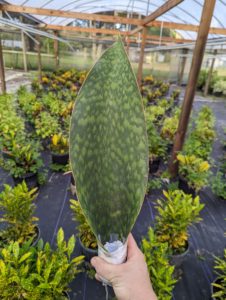 She enthusiastically agreed to be the receiving end of my mad scientist experiment of willingly sacrificing an innocent being into the treacherous bowels of the United States Postal Service. Lil Snakey was stripped of dirt, roots bundled in paper towel, and the ball wrapped in saran. I pushed a ball of paper towel in the taco and secured it, just to keep dirt from flinging out during transit. Pictures were taken to document any existing damage or blemishes before shipment. 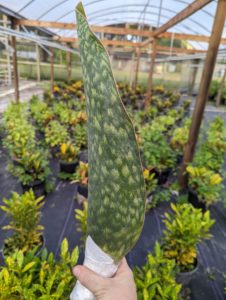 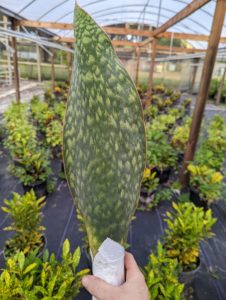 I generously measured and weighed and printed out postage, which came to under $8. The label went on the fin and fingers were crossed. The label was surprisingly secure, as I sometimes have trouble getting them to stick on boxes, let alone living, breathing things. 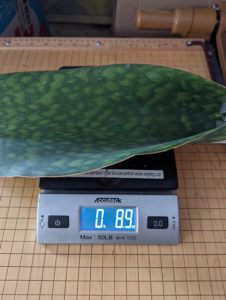 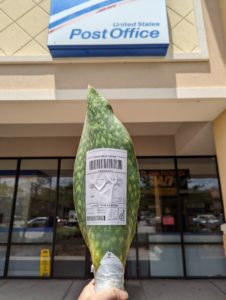 So Lil Snakey was dropped off at the USPS in Waterford Lakes plaza in Orlando, Florida. I handed it straight to an associate who took it, turned to another and asked “We can take this leaf, right?” and associate #2 confirmed, as she had apparently seen all kinds of things shipped, including an entire tree. #justorlandothings 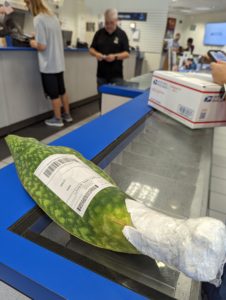 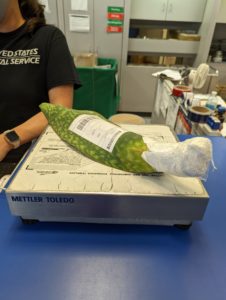 Lil Snakey was plopped into the outgoing bin and we waved our tearful goodbyes. Such a big, scary trip it was about to go on without any safety. I felt a jolt of guilt as if I was sending my own child into the ether which is USPS, but the reaffirming “it’s for science” kept chanting in my head. 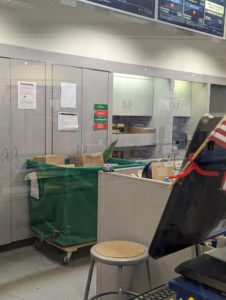 At that point, control was out of my hands and tracking said expected delivery Thursday. Nothing to do now but wait and hit refresh on the tracking page, hoping nothing pops up like “Parcel damaged”, “Package lost”, or “Seriously, you shipped a friggen leaf and expected it to go smoothly?” 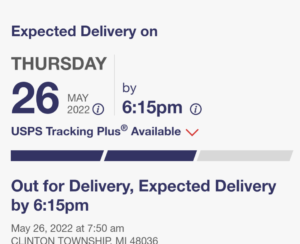 But alas, Thursday came and Lil Snakey was out for delivery. The adrenaline rush of something so comically silly can’t be described other than maybe akin to a harmless practical joke like “Ding Dong Ditch.” Sarah immediately updated me when it was delivered, and I have to say, I was surprised.

Lil Snakey made it! With a few expected scratches and bruises, she’s going to recover just fine. Lil Snakey traveled a thousand miles through whatever lurks behind the scenes of the enigmatic postal system and was handed directly to Sarah, wrappings intact. 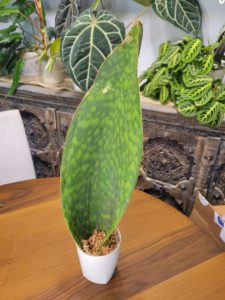 Moral of the story is: Yes, it’s possible to ship a plant without a box and Express is certainly not necessary for a Sansevieria. However, I don’t suggest incorporating this practice into your regular business. While this was a cute and interesting experiment, there’s been incidents where well-packaged plants are damaged, boxes flattened, and packages completely lost. This could have gone way differently and would have been much less satisfying to write about.

So the next time you’re either boxing up plants or unpacking on the receiving end, just appreciate the craft – because theoretically it’s unnecessary!

Can a plant be shipped without packaging?

Post-Mother’s day is usually a slump where smart people use the time to catch up on greenhouse maintenance projects – fixing plumbing issues, weed management, potting up liners that have been chilling, waiting patiently for attention. Tending to critical issues that came up during the Spring rush that had to hear “it’ll have to wait.”

I find the most solace in propagation. There’s something about the focus that’s deadening. Just find something ready to chop and chop it. Stick it in sphagnum and set it on the “settling” bench for a couple of weeks before sorting it out to its proper bench. It’s a great way to unwind from the rush and tumble that’s processing orders, but it also presents a terrible conundrum – too many plants. For a nursery owner, it’s a good problem to have as long as you don’t associate it with slow sales. Propagation is a critical facet of nursery life, but it’s also something that doesn’t need to occur nearly as often as I do it. It’s that little dopamine rush with decapitation that defines the fine line between horticulturist and psychopath.

Of course, it takes a true plant lover to find therapy in cultivation – it’s not just a product you’re offering. It’s the difference between a passion and a job. I enjoyed plants long before selling my first one and it will take work to maintain that relationship. So many hobbies-turned-business end in dismay. What once brought you great joy is now associated with stress, bills, and unhappy people. I’ve always kept the peace between the two because of the joy I find in propagation. Find something ready to chop and chop it. Aerial root present? Node fully formed? Chop it. Stick it. Prop it. Happy. Check on it in a week. Two weeks. Three weeks. It’s happy and growing. Dopamine rush. I am the master of the greenhouse. Mother Gaia.

At least in my head.

On the outside I’m stressing about a million little things and one project looming on the horizon is cascading toward me like a sandstorm. This nursery is 99% complete. It’s got all the bells and nearly all the whistles. Can’t complain. Except for one thing I had before. And that’s a big one in this state.

This nursery specialized in “classic” crops. Hedera, Epipremnum, a few Maranta, Pilea, and Monstera adansonii. Pretty much Pothos and Ivy. The high tunnels operate as intended. Hot air rises and travels to gable vents where it’s theoretically removed from the greenhouse. Of course, Pothos and Ivy are pretty resilient in even the hottest temperatures. So the nursery did not come equipped with any fans or cooling whatsoever. As the days grow longer, the daytime temperatures grow hotter, and the nights stay warm and wet, heat stress on certain varieties will be unavoidable. Thankfully, growers of past have figured it out. Evaporative cooling is an efficient, effective method of keeping greenhouses cool during the hottest parts of the day. The basic mechanism includes a corrugated cellulose pad (think a big honeycomb wall) that has a spray bar running over it, dripping water over the pad. At the bottom of the pad is a gutter system that returns the dripped water to an underground reservoir where it can be pumped back to the top of the pad.

On the opposite end of the greenhouse are exhaust fans. Big ones. Usually 36″ minimum. They pull air through the drippy wall pads on the other end and cool the tube of air. Part three to the system is a sealed greenhouse. Right now, the mechanism is open air flow which is not very effective when the air is 100 degrees outside. So in order to install and utilize evaporative cooling, the greenhouse has to be sealed, meaning the mesh material that’s composing the walls will be replaced with either plastic sheeting or (preferably) polycarbonate panels. Holes must be repaired and doors must remain closed for there to be enough pressure to pull air through the cooling pads and not through a point of lesser resistance. It’s a sizeable project with a hefty price tag, but a necessary one if I want to keep happy plants through the Central Florida summer.

Dark Side of the Moon

With social media running rampant, I was under the assumption that blogs were obsolete. With Instagram, Tiktok, and Facebook keeping me busy enough, I wasn’t about to extend myself to writing in a digital diary. Yet here we are.

Aside from fleshing out the constraints the each social media platform has – from the limited image upload with Instagram to the “I’m the last to hop on the TikTok bandwagon” learning curve – I found that one of the hardest things to manage was lack of control.

Instagram and Facebook are one in the same, meaning their algorithms throttle visibility as a result of a few things. It could be lack of audience engagement, throttling after a really popular post (c’mon just give us a couple bucks to feel that popularity high again), and if you’ve ever paid for advertising on Facebook, expect to pay forever. They know you’re good for it, so unless you boost that post, nobody’s going to see anything.

It’s the same reason you won’t find us on Etsy or Ebay. I can’t bring myself to pay outrageous fees in order to skim off the same customer base I could with a little SEO knowhow. So here we are.

I also find myself wanting to share so much more than what social media expects. They assume their user base has a 3 second attention span (in most cases, they’re right), so horticulture articles and deep write-ups on an exciting new cultivar really isn’t something for an Instagram.

Additionally, I want that creative freedom. I want to post 50 images without a character limit. If I want to drop excessive F-bombs, I don’t want to end up in Zuccy Jail. I want to be able to see my audience interact with me because they want to  – not because I paid to be allowed to share it.

So I spun up this little blog so I can put the things that I think up in the greenhouse on paper, to share exciting news, growing data, info on a new plant, or just plain writing to decompress. And you know what, feel free to read – or don’t read – just know I didn’t pay my way onto your screen 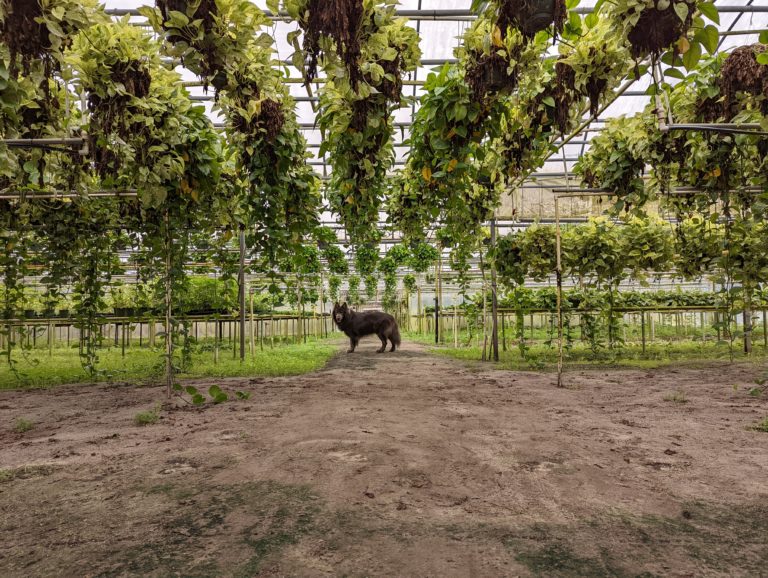 ***WINTER WEATHER***HEAT PACKS & INSULATION IN DRY GOODS CATEGORY!***/ ***STRING OF FROGS $5 WITH ANY OTHER PURCHASE*** Dismiss